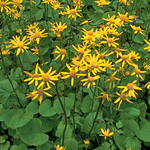 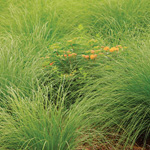 You may be one of the many individuals who have attempted to grow wildflowers by sowing a seed mix only to experience failure. Successful seeding of wildflowers depends on the right mix of native species for the area, soil preparation (which primarily involves killing existing vegetation), timing of the seeding, and weed suppression after the seeding.  From the third year on, an annual or biennial mowing or burning will keep the flowers blooming and trees and shrubs from invading.

When planting on deep, tillable soil sites (good or poor soil), a successful seeding of wildflowers and native grasses depends on having a seed bed with no living vegetation from the time of seeding until the seeds germinate in the spring.

The most successful wildflower seedings are done in late November, December, or early January because many native wildflower species have a high percentage of dormant seeds that require a cold-moist period (stratification) before germination.  This also ensures seeds will be in the soil in the spring when conditions are right for germination.  Native grasses can be seeded from January to May.  May is ideal for sowing warm-season grasses alone or when adding them to an existing wildflower seeding with a no-till drill.

The easiest sites to seed with wildflowers are those with very dry, shallow soil where bedrock is six inches or less from the surface.  These sites are frequently too dry to support trees, weeds, or exotic cool-season grasses such as fescue.  Use species adapted to sunny, dry conditions (our shallow soil seed mix).  Simply scattering the seeds on the surface during late fall or early winter may be all that is necessary for these sites.  It may take an extra year or two for the wildflowers to start blooming due to dry conditions.  Dry sites can go longer without needing a mowing or fire.

It is better to plant the seeds of species that are adapted to the existing site than to add soil for a desired mix of species.  When picking a mix of flowers, use a deep soil seed mix for deep, clay soil that is flat to gently sloping in sun, even though the site seems dry.  Use a shallow soil seed mix (or shallow soil and deep soil mix together) on a steep south or west facing clay slope.

Even distribution of the seeds is important.  Drills are good for large areas.  Broadcast (cyclone) seeders will handle a wildflower mix, but not grass.  Hand broadcasting the seeds works well for small areas up to an acre or so; however, be sure to dilute the seeds with a light, small-particle substance like sawdust, potting soil, or vermiculite to achieve even distribution of the seeds.  By dividing the diluted seeds into four or eight equal volumes and the area being seeded into four or eight equal areas, you will be able to calibrate the accuracy of your seeding technique on the first area seeded.
Getting Started:
1)  Evaluate the site and plan the timing of activities.  Identify the type of soil and its pH.  Determine what and when to plant, and when and how to kill the non-natives.
2)  Kill the existing non-native vegetation.  Most non-native cool-season grasses, such as fescue, can successfully be killed.  Don't plant wildflowers on areas where sericea lespedeza, bird's-foot trefoil, or crown vetch are or have been present because the hard seeds of these exotic legumes may lie in the soil for 10 to 20 years before germinating.  You could control exotic legumes with a broadleaf herbicide while raising native grasses in one of these legume-infested areas.
3)  If there is a layer of thatch (dead vegetation) covering 100% of the soil, it will prevent seeds from making good soil contact.  The area should be burned or mowed & raked to remove the thatch, or dragged with a harrow or a piece of chain-link fence just before seeding to loosen and fluff up the thatch.  This step is not necessary of the thatch covers 80% of the soil or less.
4)  Wildflowers grow best in soil between pH 5.5 and 7.5.  If soil pH is above or below these figures, the plants may not be able to take in nutrients from the soil.  Fertilizer usually is not needed when seeding wildflowers.  Nitrogen tends to encourage weed competition, and it can hamper the growth of native grasses.
5)  Sow the seeds on the surface in late November through mid-January and let freezing and thawing work them into the soil.  Wildflower seeds will germinate in the warm days of March and April.  Warm season grassses won't germinate until the soil temperature maintains 60 degrees F--usually in May.
Maintaining the Project:
1)  During the first growing season, cut the weeds (and wildflowers) back to six inches high when the average weed height is one foot.  Most perennial wildflowers and native grasses remain less than six inches high their first year.
2)  It usually isn't necessary to cut weeds during the second growing season.  However, if weeds are thick and creating a closed canopy above ground, cut the weeds (and wildflowers) back to six inches high once when the average weed height is one foot.  This step usually isn't needed, but be prepared.
3)  From the third year on, an annual or biennial mowing or burning of all or part of the planting will promote the vigor of the fire-dependent wildflowers and grasses and help prevent the invasion of many fire-intolerant trees, shrubs, and exotic species.  It is better to burn any time except mid-March to mid-July.  Late summer burns help suppress native grasses.  Burning or mowing is often done October through February.
4)  Always remove or kill exotic legumes like serecia lespedeza ASAP to prevent re-seeding.
Previous Post
Next Post